THE PLACE: A HUB OF RECREATIONAL ACTIVITIES FOR KARACHIITES

The Place is a large entertainment complex that was launched in 2013 right in the midst of DHA phase VIII. It promises a wide variety of recreational activities that keep the entire family engaged as they are not exclusively for kids.

It has the largest cinema in Karachi, Nueplex Cinema on the second floor which has been built by world’s renowned architects. It hosts five state of the art screens with world class technology. This cinema has provided a platform for the local film industry to grow. Furthermore, this initiative also encouraged local film makers and investors to invest in large budget film making since the target audience increased exponentially. This in turn has resulted in creation of jobs for the young generation in the film industry.

Before the inauguration of this recreational mall DHA phase VIII only had minimal recreational options for families. This is in great contrast to today as this area continues to attract large number of families from various corners of the city. In addition to this, the area under discussion has also witnessed a hike in real estate value since Place has added a multitude of pull factors for denizens in this vicinity. 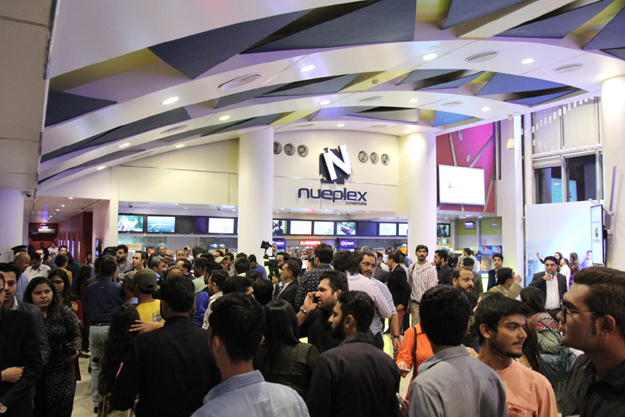 It is evident that the planners of The Place/Nueplex exercised a great degree of foresight since they took a large risk by dedicating such an immense investment to entertainment industry. Additionally, the complex boasts of high standard maintenance and maximum security for the visitors.

Trip Advisor is used by most wary Pakistanis and foreigners to read reviews about various places before they visit them. It is interesting to note that it has rated The Place/Nupelex as 4.5 on a scale of 0 to 5. Individuals no longer need to travel long distances within the city or around the world to have an amazing cinematic experience as soon as their favorite movie is released.

Similar projects need to be supported by the government and related authorities so that there is greater investment in the entertainment industry and Pakistan is featured in international news for positive reasons.

One of the primary lure for families is The Place’s Drop Tower (tallest in Karachi), an exciting carousal for kids, and thrilling bumper cars. The Place continues to attract even those individuals who are not too keen on entertainment due to its sprawling shopping mall that houses top brands. Moving on, it also has a spacious food court that caters to the tastes of a wide range of visitors as it not only has fast food and desi options but also features health conscious options.

In an effort to retain old and attract new clientele The Place continues to improvise. For example, it has opened up rooftop restaurants that boast picturesque views and pleasing ambience for visitors that are looking for an extra ordinary experience. It will not be an exaggeration to say that The Place/ Nupelex is on the go to list of every Karachite who considers himself/herself social.