SPOTLIGHT: BACK TO THE FUTURE

With nearly a year’s worth of accumulated financial losses, internal issues of dodgy business practices remaining to be sorted out, and Covid-19 SOPs fixed firmly in place, Pakistani cinema has, nevertheless, started out on the arduous path to recovery on September 11, with the release of Tenet and Mulan.

It will be a challenge, and from that challenge comes the million-dollar question: can Pakistani cinema survive with just Hollywood films?

Despite still hearing cries that we have to create avenues to bring Bollywood movies back — and, truthfully speaking, at this juncture we need all the help we can get to bring people back into cinemas — at least for the next full year, we may still yet survive on our own.

In fact — and keen-eyed pundits can mark my words as an early prediction — 2021 will be the most financially successful year in Pakistani cinema since the new-wave hit us in 2013 with the small independent horror film Siyaah.

While the years since have not been as kind, and the films sub-par, Covid-19 has given us one good reason to return to cinemas when it stopped all releases from completing production this year. While damaging at first, the reshuffled production schedules forced most major titles to reevaluate their release strategies, inadvertently piling titles from 2020 and 2021 together on to a single year’s slate.

The list, especially of high-profile titles, is impressive as it is extensive, with most productions coming from filmmakers who have consistently proved themselves at the box-office.

Straight out the gate later this year is Nabeel Qureshi and Fizza Ali Meerza’s Quaid-e-Azam Zindabad, an Eveready release. The film is a return to a more commercial form from the filmmakers who gave us Na Maloom Afraad.

While little information is out at the moment, the official poster, showing Fahad Mustafa standing in front of an imposing pile of money, with a smaller, yet hefty stack of cash in his hands, gives one a clear idea of the gist of the film: corruption — and a lot of it, in fact.

Fahad plays the archetypical good-bad cop popularised by Bollywood movies such as Simmba (the closest example I can think of), and Mahira Khan, the leading lady, has a “unique” role, I was told by the director a while back. The combination is untested but unique, because both Mahira and Fahad are individual powerhouses whom audiences respond to.

One thing is certain, Nabeel and Fizza are adamant on releasing the film later this year. The competition will be less, and the success of the film will give other filmmakers confidence to release films on dates other than Eid.

Besides, Nabeel tells me, they’ve got other films to make, so it’s best not to get stuck on one film for long periods of time. 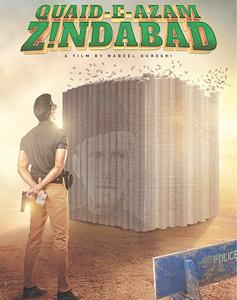 One film that differs from this philosophy is the The Legend of Maula Jatt (TLOMJ) — a long gestating “saviour of Pakistani cinema” that has battled court cases, international release dilemmas and long production and post-production schedules.

What’s left to say about it that hasn’t already been told by the film’s first trailer that came out last year? It’s a whopping, fantasy-esque, reimagining of the classic Maula Jatt and Noori Natt skirmish, with a to-die-for star cast: there’s the deliciously evil Hamza Ali Abbasi as the unhinged Natt, Fawad Khan as the buffed and brooding Jatt and Mahira Khan, in her second major film of the year, as Mukhoo Jatti, Maula’s love interest.

London Nahin Jaunga (LNJ), whose first look was exclusive to Icon a few months ago, is the third heavy-hitter on the list. With about a third of its shooting schedule — the London bit of the title — yet to finish, the film, a spiritual successor of Punjab Nahin Jaungi, with roughly the same archetypes of characters — and a rip-roaringly fun screenplay and direction (a fact this writer can attest to) — will hit cinemas around Eidul Azha next year. The film, as if one didn’t know, stars Humayun Saeed, Mehwish Hayat, Kubra Khan, Gohar Rasheed, Sohail Ahmed, Salman Shahid, Iffat Omar and Saba Faisal.

On the list of complete (or nearly complete) feature films is Money Back Guarantee (MBG), directed and written by Faisal Qureshi, and to be released by Distribution Club. A money-heist comedy-thriller that promises one’s money back from the title, MBG will be an engaging laugh-riot from a filmmaker who knows how to deliver action and comedy.

Icon has already learned from actors Gohar Rasheed and Kiran Malik — two faces who are set to appear on at least two, if not more, titles the coming year, that MBG’s shooting schedule was surprisingly tight. Starring Fawad Khan (his second film of the year), Mikaal Zulfiqar, Gohar Rasheed, Shayan Khan, Jan Rambo, Kiran Malik, Hina Dilpazir, Ali Safina and Wasim Akram in his film debut, MBG was initially set to release in 2020.

In this writer’s opinion, fixing the right release date will prove to be a dilemma for the makers of MBG. TLOMJ will likely target one of the two Eids. The preference, however, will be to release MBG either before or immediately after TLOMJ — but not with the film, as it would divide lead actor Fawad Khan’s draw at the box-office.

One prime candidate that will not budge from an Eidul Fitr release is ARY Film’s Tich Button — a romance-action-drama (the combination is oft referred to as “a family entertainer”), produced by Salman Iqbal and Urwa Hocane, starring Iman Ali, Farhan Saeed, Sonya Hussain and Feroze Khan. The film is already complete, save for a few days of shooting. 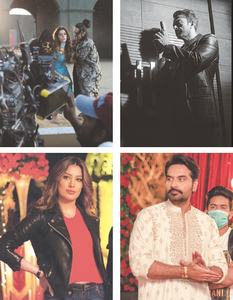 Eidul Azha, meanwhile, has its own share of problems: if — and this is a big IF — LNJ’s London schedule gets completed (which in all likelihood will be; ARY Films has the resources and foresight to finish the film on time), then LNJ will directly compete with Ghabrana Nahin Hai (GNH) — a romance-drama-comedy starring Saba Qamar in a versatile, multi-character role.

Although sworn to secrecy, GNH producer Hassan Zia did reveal that his film begins at a wedding with three different suitors — Zahid Ahmed, Syed Jibran and Nayyer Ejaz. GNH is the first of a string of productions from JB Films, the production house of Nueplex cinema owner Jamil Baig. However, like LNJ, GNH has yet to restart its production run; unlike LNJ, the shooting will likely finish by the first quarter of the year.

One other title that will likely fight for a coveted Eid spot will be Shaan Shahid’s directorial/starrer Zarrar — a fast-moving, globe-trotting spy-thriller that too has been gestating on the edit bay for over a year. The film also stars Nayyer Ejaz, Shafqat Cheema, Adnan Butt, Kiran Malik and Nadeem (the actor in particular has a very stylised look, sporting Ray-Bans, driving convertibles and running a top-secret covert action unit of a one-man army).

One often discussed alternate for Zarrar could be an August 14 release. However, given the film’s unconfirmed budget of over a million dollars, there is a substantial risk releasing Zarrar on an untested release date.

The multi-picture release strategy (especially if it’s three films or over) isn’t good for any film’s business, but it may be unavoidable if production houses and distributors vehemently push to release titles on proven box-office dates, and not explore other options.

Director Yasir Nawaz is intelligent enough to avoid this dilemma altogether, he told me one day on the phone. Yasir’s film, Chakkar, also an Eveready release, is an engaging thriller-comedy that the director said he’d make when the market had developed enough when this writer met him for Icon’s interview nearly a year-and-a-half ago. Chakkar, starring Ahsan Khan, Neelum Muneer and Yasir himself, will probably take the Teefa in Trouble route, and release the film in the middle of the two Eids.

Wajahat Rauf’s next directorial venture, Parde Mein Rehne Do (PMRD) — another Eveready release which wraps shooting in December — initially pegged an Eidul Fitr date for exhibition. Depending on how release schedules develop, Wajahat’s film may have to rethink its release date.

PMRD is a departure from the norm for the director. “It’s [about the] social issue of infertility, dealt with comedic overtones,” he tells me on the phone. He adds, in reference to his earlier films, “People don’t travel from city to city at all in this film.”

The film is written by Mohsin Ali (his second film in the year’s slate after GNH), and stars Ali Rehman, Hania Amir, Javed Sheikh and Noor Hasan amongst others.

Two other high-profile titles — Ishrat Made in China and Dum Mastam — yet to finalise distribution partners and release strategies, may well have to find sweet spots between tentpole Hollywood films sometime in the early months of summer.

Starkly different, Ishrat is an expensive action-comedy with a stellar star cast of director-actor Muhib Mirza, Sanam Saeed, Shamoon Abbasi, Sara Loren, Ali Kazmi, Mani, Mustapha Chaudhry, Shabbir Jan, Imam Saeed, Nayyer Ejaz and Hassan Sheheryar Yasin. Dum Mastam is a romance-drama directed by Muhammad Ehtashamuddin, produced by Adnan Siddiqui, and starring Imran Ashraf and Amar Khan. Both titles appear to have the zest to easily slip-in between Hollywood blockbusters, or if need be, pushed to the winter holidays of 2021.

Realistically speaking, even after Quaid-e-Azam Zindabad hits screens by the end of this year, the box-office will still need time to find its footing. The audience’s confidence in extravagant spending may likely return from March onwards, and with post-production still pending on most titles, chances are we will see films announcing solid release dates in the first quarter of the coming year.

With titles capable of grossing anywhere from seven crore rupees to 50 crore rupees (the specifics of this calculation is best left for another article), the year 2021 will prove to be a benchmark year, with a rough business potential of nearly 200 crore rupees ... if, that is, everyone plays nice with each other.